Earlier this week I was reminded of one of our many holiday disasters, see 9 Reasons Not to Travel, when there was a cruise ship on the telly box.  We were eventually shipped off Majorca by the Thomson Dream, which is another post for another day, but this captures the last few hours of tranquillity before our epic journey home.  I wrote the following a few years ago after a creative writing workshop, led by Brendan Hawthorne at Bleakhouse Library in Sandwell.

It was the only plane in the sky that day

Waves were lapping against the wall and I was lulled into a day dream by the soft murmur of voices in the cafe behind me. The clatter of plates, the clink of glasses, the smell of warm dough, made my stomach rumble as it baked in the pizza ovens. The sunlight sparkling on the sea, but all was not right with the world.

The sea plane broke this spell, its engines roaring as it took off over the bay, swooping birdlike across the landscape. It was the only plane in the sky that day. 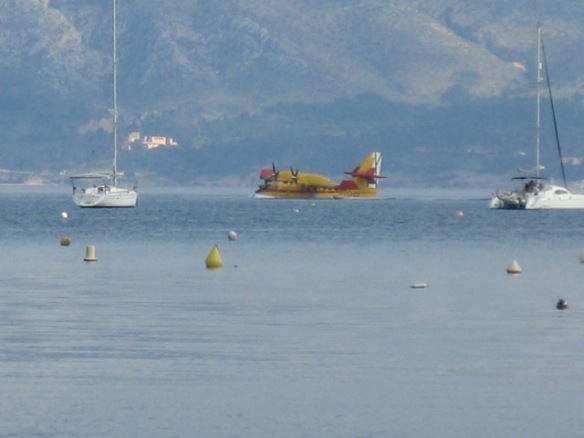 All other flights were grounded worldwide because of the volcanic eruption in Iceland.

I had been told that these planes regularly took off for practice flights. They would scoop up the sea then letting it tumble out, high on the hills, rehearsing for the regular summer fires they dampened down.

This was my first sighting and I grabbed for my camera trying to focus on the yellow dot in the glare of the sun. I had seen seaplanes in movies, the golden age of travel, ladies in their furs carrying hat boxes, men with trilby’s and neat moustaches. That must have been how this bay was when Agatha Christie set a short story here. Now I too was experiencing my own problems in Pollensa Bay.

Uncertainty had dominated the last three days. Sky TV updating us of the situation. Tears and tantrums from some, disbelief from all as the reality unfolded. No one could tell when or how we would be going home. Schoolchildren were delighted to have an extended break. Parents worried about their jobs, the car parking, goldfish and house plants. The lobby reverberated with the tap, tap, tap of fingers spelling out messages on their laptops, Blackberries and Apples, sending out an SOS to the world.

I had come down to the sea to get away from the buzz of anxiety, the speculation and constant information underload. Pine Walk was an escape from all this. Children searched for treasure with nets in rock pools, oblivious to the crisis that was unfurling, while parents huddled behind windbreakers wearing sweaters with shorts on the beach. In a few months they would be doing much the same in Rock or St Ives.  Meanwhile for Easter, families rented stucco villas as older couples wallowed in step back in time luxury at an Art Deco hotel, all taking early evening strolls after their siestas, to build up their appetite. Just as well heeled travellers just arrived by steamer from Barcelona may have done, in the halcyon days between the wars.

Similar journeys to those intrepid travellers of the thirties were now to be experienced by the world weary tourist. By land and sea from Spain to England, almost nonstop through France, with glimpses of cathedral spires in Barcelona, rush hour ring roads of Lyon and the well ordered allotments of Calais. No flights home for us this year. Departure lounges lay vast in their emptiness, floor polishers echoing around the shuttered mall. The baggage carousals, silently still, no lone suitcase revolving, unclaimed. Planes grounded in their hundreds on the runways, stretching out as far as the eye could see, white crosses marking casualties not of war, but of nature.

Staff at the local travel agents will never recommend any where that they are going on holiday to me and my family. This is because they know about our track record for holiday disasters.

These are those I recall off the top of my head, in no particular order.

>
> Dear British Citizens,
>
> A severe flood warning remains in force for major rivers, streams and low lying areas of Western Viti Levu This has caused major flooding and has closed roads paticularly in Nadi Town and left both locals and tourists stranded.
>
> Should you wish to seek urgent consular assistance or know off any british nationals in need of urgent assitance please do not hestitate to contact us on the telephone number (679)3229100 or (679)3304746.
>
> In light of this adverse weather conditions, we will be grateful if you can confirm yuor safety and well being in Fiji. The Consular team would like you to monitor the latest situation on the Fiji Meteorological Service website: (www.met.gov.fj) or http://www.ukinfiji.fco.gov.uk for further update.
>
> Kind regards
> Consular Team.

Of course this won’t stop us travelling. Off to Dalyan again in 2 weeks time. The mission to take Mom to all the places she loved, begins.

PS just back from Dalyan. We had another earthquake. This prompted us to recall other holiday disasters….

10. The shoe bomber incident which meant we could not bring the wine we had bought in Kefalonia  back to the UK. We sold it around the pool and gave it to the reps.

11. The hurricane in Kefalonia that kept us in the hotel all day. I love storm watching so this was a treat for me but lots of moaning from others that they couldn’t sunbathe or use the pool.