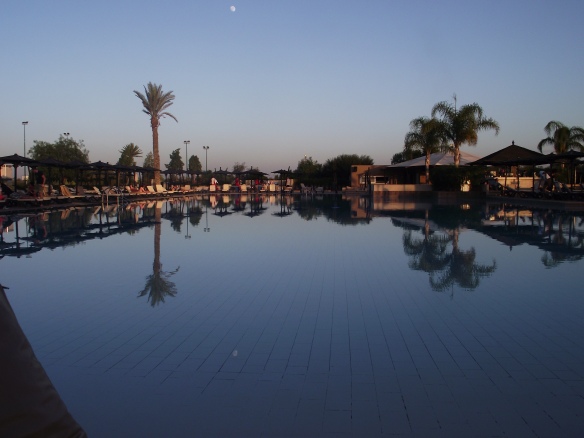 I don’t think I have ever stayed in a 4* hotel let alone go All Inclusive so I was a bit apprehensive when I booked a week away just before Christmas 2013.

2013 had been a tough year for me and the idea of a pre Christmas break seemed like a very good idea indeed. (Those of you who read my blog regularly will be aware that my mom passed away early 2013 and I have had a struggle clearing her clutter and managing my own health for most of the year). So yes I needed another holiday.

It became a very good idea when I looked up some package holidays and saw the prices.

I don’t usually talk about how much my holidays cost, but on this occasion I will just to put it perspective what an amazing bargain this holiday was. I am always being asked how I afford so many holidays, the answer is that I make sure I get a good deal. If the price isn’t right I don’t go. There are still really good deals to be had. I also never, ever pay for inflight meals or to guarantee sitting together. Utter waste of money. So here goes.

One week, All Inclusive, gym, indoor and outdoor pool, free shuttle bus to the city,  for two people came in at under £600. ($996 approx). Including flights from my local airport in Birmingham, England. It seemed a unbelievably good bargain. After all we had paid around the same for a grotty bed bug ridden 2 star B&B hotel in Malta only a couple of months ago. Our B&B in Yorkshire was costing us about £80/$131 a night. With all the additional costs of fuel in the car and other meals we were paying about £110/$183 per dayThis holiday worked out at £85/$141 per night.

So of course I booked it.

I had no idea what to expect. I have travelled mainly in Europe and so called First World countries. I have been to Turkey a few times and travelled in SE Asia so thought that I would have been prepared for Marrakech.

I was wrong. Nothing can prepare you for Marrakech.

As we drove from the airport to the hotel my face was glued to the window of the coach. There were actually donkeys in a 4 lane road surrounded by lorries, buses, cars and mopeds. And bikes, lots of bikes. Moped riders wore helmets, unfastened of course, and bike riders caught lifts from them, one foot on the moped and one foot on the bike pedal and holding on to the rider. Crazy mad dangerous.

I liked this place.

Our hotel was the RIU Tikida Palmeraie Marrakech and is a few miles outside the city, and was an oasis of calm. I was very overwhelmed by all the luxury, the fact that our cases were delivered to our rooms. We were travellers for goodness sake, not holiday makers. Would I have to dress for dinner? Would everyone think we were the scruffs? Would I have to tip?

On the plane there had been some obnoxious, wealthy business men who talked loudly and verbally abused the attendants throughout the flight, and they were at this hotel. My heart sank, we were definitely the poor plebs here.Then I saw they had golf clubs, so reckoned I would not be seeing much of them. They had not brought wives and partners, this was a boys only trip.I imagine their partners had whooped with joy as  their hubbies had left the house and had dashed down to to the Bull Ring with the Amex pretty swiftly.

Marrakech has some very good golf courses. Indeed I noticed that more golf resorts were being built on the outskirts when we were on trips out of the city. And there is a lot of space to build on, and boy are they building. All shiny four and five star hotels. Yawn, golf.

Our room was lovely and we had different swan towels every day. And yes of course I took pictures!

We discovered that we could, like Hobbits, have a first and a second breakfast, lunch, afternoon tea and dinner. (We never did). There were three place to dine, the main restaurant, plus tables at the Moroccan and Italian themed restaurants could be booked. That said the main one served such a wide range of food, including Italian and Moroccan dishes, so these themed places were just a bit more cosy and intimate for a special meal. And all the drinks, soft and alcoholic, were of course included.

So used are we to being frugal, we forgot that the drinks were free and caught ourselves wondering if we could afford a drink in the bar. Then we remembered we had those little bands on our wrists and we were ‘All Inclusive’.  It was a novelty to have a brandy after dinner, or a G&T before. And the waiters always filled up your glass with wine as soon as you put an empty one down. The buffet was so varied, the quality so very good and we tried lots of new foods. It was easy to balance the less healthy indulgence in cakes when you knew you had had lots of salads.

Two things had worried me about All Inclusive. That people would pig out and overload their plates with food and waste food, and, because the drinks were free they’d get drunk and behave like louts. And I don’t just mean us. To be fair we didn’t stay up late and drink with the many who watched the various entertainment acts at the hotel, yet we never heard any rowdiness, nor witness people getting pissed around the pool by day. This was not the Benidorm nightmare I had dreaded. It was all very civilised without being stuffy. Jeans were ok for dinner, shorts, bikinis and football shirts were not. Correction, football shirts did begin to make an appearance around the pool and a breakfast. That was because Morocco was hosting a big football tournament and many of the fans from Brazil were staying at our hotel.

When we did an open top tour of the city, the bus was packed with Brazilian football fans waving flags and shouting to fellow fans as we passed. In England you would get off a bus if 50 football fans got on, and wonder when the police would be needed. Here, it was all good fun, no nasty rivalry between fans.

We couldn’t fault the hotel or staff and there was no pressure to tip. We began to relax and then we took the bus into the city and decided to explore the Medina. And that is when the adventure begin. If only I had been able to read this by The Wagoners Abroad before I went (I couldn;t have cos we went before they did) or this by Life Out of the Box (again, we were there first) but if you are thinking of going to Morocco, I would recommend you read their blogs as they are excellent guides to  preparing for Marrakech. I hope that my subsequent posts about our experience will be helpful too.